Becca and I got a fairly early start in hopes of beating the wind, which was supposed to get bad in the late morning and early afternoon, with gusts reaching 45 mph after 1:00 p.m.  We managed to get in a good long hike, only having to deal with breezy-to-windy conditions toward the end of our trek.  Now, just before 2:00, the wind is really howling, and a bit of dust is stirring in the air.  We saw a few other outdoor enthusiasts west of Tortugas, one duo--a guy and his dog--really caught Becca's attention as we climbed a hill while bushwhacking.  The man and dog were on a nearby trail, and Becca was hoping for an invitation, but I kept her back.  It was 41F when we headed out this morning, and because there were abundant clouds and a constant breeze it felt colder than it actually was.  Not too cold for a long desert trek, though, and we enjoyed our morning out together immensely.

Those photos of the clouds, sun, blue sky, and the desert floor are gorgeous. You and Becca were lucky to see such beautiful sights. 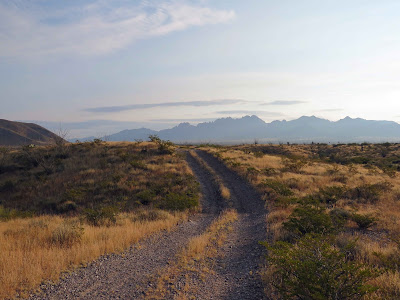