Becca and I got a relatively early start on an extra long hike this morning, and we were out there for a good spell before spotting other people.  On our way back up the trail to the high foothills we encountered three hikers--two women and a man--who looked prepared to trek around the entire mountain.  The man was very friendly, half-determined to get Becca over to him for an ear scratch, but I said, "She'll probably ignore you."  He said to her, "Are you that kind of dog?"  A moment later, as she walked away from him, he said, "I guess you are."  We all had a laugh.  Our most interesting sighting was of the juvenile Cooper's Hawk pictured below.  We first saw it on one of the practice poles over at the Lineworker school grounds, and then again as we were heading back on the final leg of our trek.  The hawk was flying down the arroyo hunting for breakfast, but I failed to get a photo of it in flight. 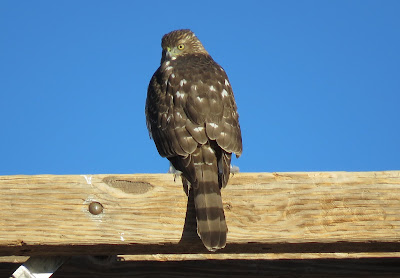 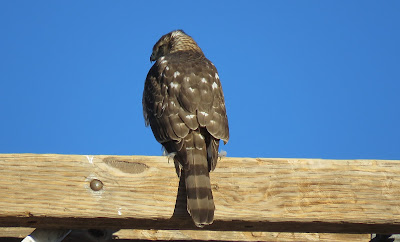 Great photos of the Cooper's Hawk, Packrat. Such pretty markings.