Not long after I began bushwhacking west off the outer loop road I spotted a raptor over half a mile away, perched on a tall Torrey Yucca.  It stayed there while I hiked (generally) in its direction.  When I came abreast of it--about 200 yards away--I made the decision to try sneaking up on the hawk (whick looked to be a Red-tailed) for a better photo.  As often happens it decided not to let me get too close; so the three images here were the best I got.

Not long after retracing my steps to the ridge I'd been trekking along I spotted another desert denizen, a coy Coyote who was scoping me out.  She was ambling down a hill toward the major arroyo that runs out of Tortugas Mountain's west face, and, for whatever reason, I decided to try following her.  She wasn't moving very quickly, but I knew exactly what would happen:  what happens every time I follow a Trickster.  She led me down into a copious growth of Chihuahuan Desert riparian flora before disappearing completely.  I climbed the hill on the opposite side of the arroyo thinking I might catch a final glimpse of the canid, but no such luck.

There were other outdoor enthusiasts on and about the mountain early this morning; in fact, I bumped into one just after exiting Whitey the CR-V, my buddy Raymond.  He and I trekked partway up the mountain together, palavering all the way.  I hadn't seen him in a long time.  When I mentioned that to him, he said, "Since October."  I had no idea it had been that long. 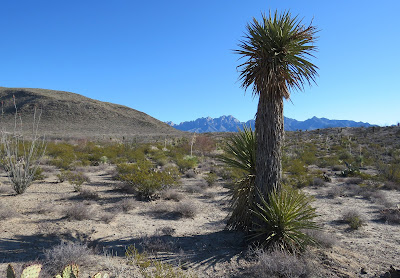 I really the photos of the Trickster, especially the last one where you're looking at her/him through the ocotillo branches.