Because Dr. K was feeling a bit under the weather I took Frio and Willow out by myself this morning; it's something I've done often in the past, but not in a long while.  The weather was rather raw:  36F with a wind chill of 26F.  My weather app clocked the wind speed at 7-to-10 mph, but it seemed stronger than that, especially with the gusts.

Nevertheless, the three of us trekked up to Second Arroyo, entered and stopped briefly for a photo-op.  Then we headed eastward in the arroyo, bushwhacked over the ridge through First Arroyo, and kept going until we broached the hill that runs east/west from Tortugas Mountain.  In the distance I spotted a Coyote carrying what looked to be a rodent, but neither of the Heelers saw it.

We followed a little-used single-track trail back down to LDR and then hiked south back into the upper flatland and our waiting CR-V.  Even though Willow pulled excessively on the lead, which is often the case, we three had a decent long trek in our section of the northern Chihuahuan Desert. 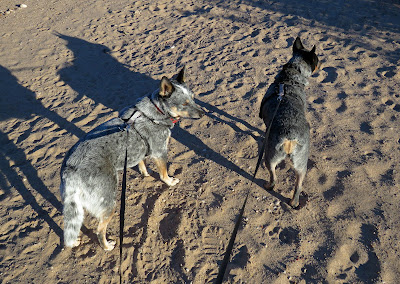 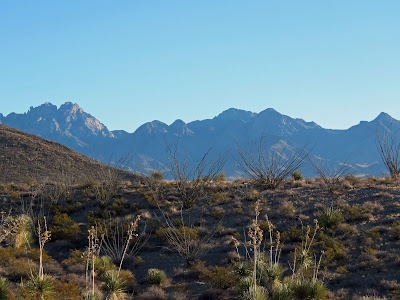 I like the photo of the second arroyo. Wish I could have been there with you all.