Just as soon as we started off this morning I saw a white SUV driving up LDR; it then turned west into some of the arroyos Frio, Willow and I explore before turning east to pick up the dirt road again.  It then began heading in our direction.

We hiked along the upper flatland road to LDR-A, and just as we reached it the newcomers, whose names I know now because of joint introductions--Pamela and Terry--were coming up.  We stood talking for a while until the guy in the hoodless white Jeep passed us.

Later, as we were almost to the Tellbrook Arroyo, a side-by-side came rocketing down LDR.  Once passed the arroyo we turned east and began bushwhacking precisely to avoid encountering the ORV if the guy driving decided to turn around.  By the time he did we were well into the roadless desert.  From there we retraced our steps and returned to the upper flatland and our waiting CR-V. 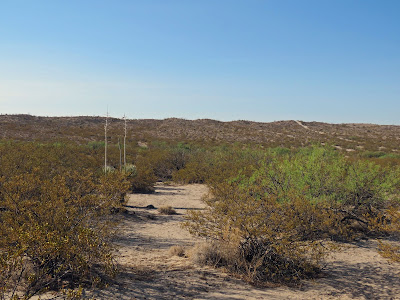 I like those photos of the Heelers resting in the shade.