Heelers and the Hump

We all--Dr. K, Willow Frio and I--set off on our early morning trek this morning down LDR, and before we'd gone a sixteenth of a mile the runner with the standard white poodle approached from behind.  We had to quickly stand at the side of the dirt road while they passed.  After we exchanged greetings, she said to Frio, "Hello, cutie."  That's when he decided to bark at them.  I got him to stop immediately, but Willow was acting up.  She barked, whined and whimpered to get at the poodle, and she was somewhat hard to control for Dr. K.  Willow definitely needs an attitude adjustment.

We continued on our hike after the encounter, heading up to the second arroyo.  Upon entering I let the Heelers off their leads, and they immediately lit out after something--probably a lizard--disappearing into the desert creosote and underbrush.  Dr. K fretted about them, but they returned less than half a minute later.  She worries--and I do, too--because rattlers are out and about, and we haven't yet been able to get the dogs vaccinated.

On our way back after a brief respite in the arroyo we encountered the archer, who'd parked in his regular spot and had already been practicing with his compound bow when we passed.  Having briefly inspected his target, I said, "Looks like you're hitting the white rectangles more often."  He said, "Not nearly enough.  It's so damned hard to do."  Shortly after our exchange the Heelers, Dr. K and I were back at the CR-V. 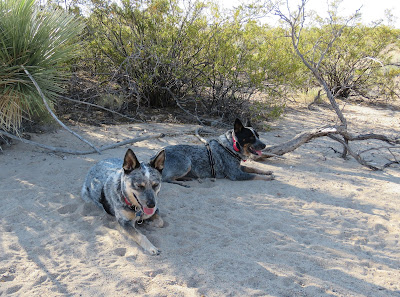 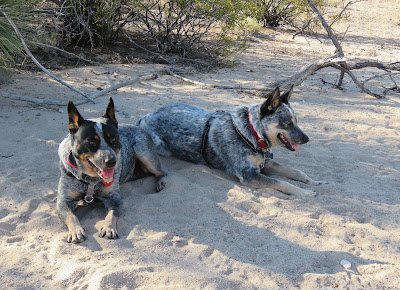 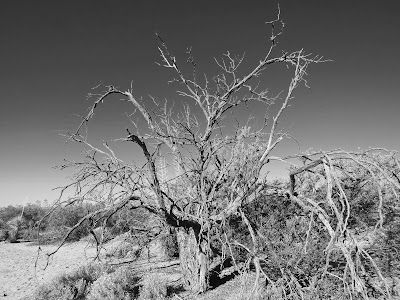 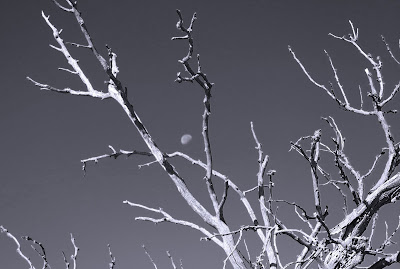 Nice photos of our heelers. They are so cute but sometimes pretty naughty.