Dr. K, Frio, Willow and I left Whitey the CR-V parked at the barriers at the west end of Geothermal Road, hiked a ways up the dirt road and then bushwhacked through a heavily flora-laden arroyo to reach the northernmost dirt road that parallels Geothermal heading east.

We found no clear path through the brambles, cactus and mesquite lining the southern bank of the arroyo so we had to zig-zag this way and that to make it through to the steep slope leading to the road; it was quite a workout.

We saw nobody out there, and only had a brief encounter with a low-flying hawk that both Willow and Frio wanted to chase.  There were no cars parked near the barriers when we left, and there were none there when we finished our hike later in the morning. 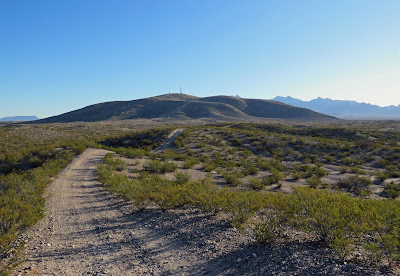 That's a nice photo of the 3 of you during our hike.