East Toward the Organs

Took the two Heelers--Willow and Frio--out with me alone this morning, and we drove out to the area where Aggie Rodeo Drive intersects with Sonoma Ranch Road, left Whitey the CR-V in the parking area there and hiked the dirt road toward the Organ Mountains.

Other than my efforts to control both pups on retractable leads while trying to take photos with my phone the most notable event was encountering a lone Coyote who was not a "lone wolf" after all.  When the three of us turned onto a dirt road north toward the major arroyo that runs east/west alongside Tortugas a large male member of Canis latrans made his presence known by howling loudly and standing prominently out on a knoll slightly to the east.  Frio, being partially deaf, heard nothing, but Willow was visibly upset by the sound and sight of the prairie wolf.  A moment later we saw him dashing to the west, where he greeted others nearby, the pack howling and yelping loudly.  We retraced our steps after that, and Willow pulled nearly all the way back to the CR-V.

Over the years I have frequently had Coyotes show themselves to me and the dogs I was trekking with, but not quite in this way.  This guy seemed to be trying to lure the hounds to chase after him.  Fortunately both pups were secure on the ends of their retractable leads, and neither dog seemed inclined to pursue the Coyote even though both saw him. 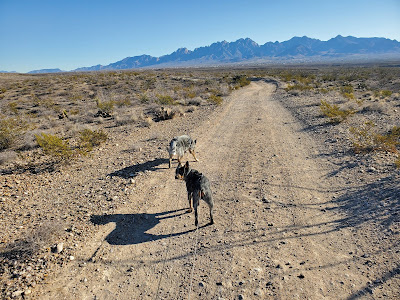