Dr. K, Frio, Willow and I did a very long hike west of Tortugas this morning, following trails, dirt roads and doing a little bushwhacking in order to end up in the hills west of the mountain.  The weather was stellar:  46F when we started out, destined for a high of 73 degrees.

We encountered a woman jogger just after beginning our trek, and Frio barked at her a few times.  We saw no one in the outback, though, and our hike remained people free until we got up into the high foothills and began our return to the Sunset Area.  Frio and I came up out of a gully and came face-to-face with a man running on the trail; Frio barked somewhat aggressively at the runner until the four of us got off the trail to let the guy pass.  I apologized to him and explained that Dr. K and I were dealing with new dogs whose training was still in progress.  The man was friendly and didn't seemed bothered by the situation.

A short while later we ran into two women hiking with two dogs; the four of them were super friendly, but Frio acted out again.  I'm beginning to wonder if his behavior has to do with being on-lead.  Our previous dog, Becca, was sometimes more territorial when leashed.  I'd be more certain of this speculation had Frio not behaved properly in meeting Rene's dog, Rayo, both times on a lead.  I'm certain Frio's behavior will improve as he gets more accustomed to meeting strangers on and about the mountain; after all, he's hiked with me just nine times, and only three times with Willow.  By the way, Willow did bark a few times when we bumped into the women hiking with two dogs. 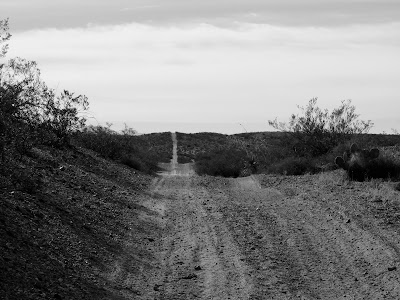 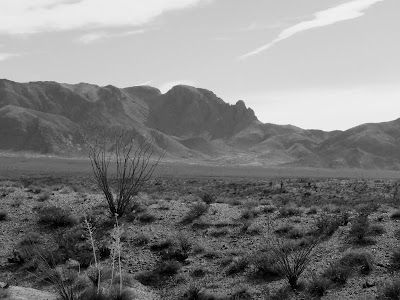 That's a great photo of you, Willow, and Frio. A beautiful winter day in the desert.

Yes, Willow is having fun trekking in the desert with Frio.