We started off with good intentions this morning, our plan to take Frio and Willow to Organ Mountains-Desert Peaks National Monument for a hike.  Best laid plans, eh?  We got them both into the back of the Jeep, both wearing their new halters.  As soon as we backed out of the garage, though, it became apparent that Willow was highly agitated.  After driving a long block we decided to turn around; what convinced us was an aroma that indicated an accident had already happened or was in imminent danger of happening soon.

Dr. K suggested that she would let Willow into the backyard and then take her for a short walk and that Frio and I would continue on for a trek.  Fortunately the rug in the back of the Jeep was unsoiled.  I decided not to drive to the national monument, opting instead for the Sunset Area side of Tortugas Mountain.  Frio fared well; it's clear he has all the requisite stamina of a young heeler.  Good thing I kept him on lead, though; twice he tried to streak off after a jackrabbit, both times being safely restrained by his new halter.  On the final leg of our trek Br'er Jackrabbit dashed across the trail ahead of us, and Frio only reacted by an additional perk to his already perked ears.  That convinced me that I'd given him a good workout this morning.  Tonight I'm sure I'll be tossing his ball down the hallway for him to retrieve.  That's what we did last night. 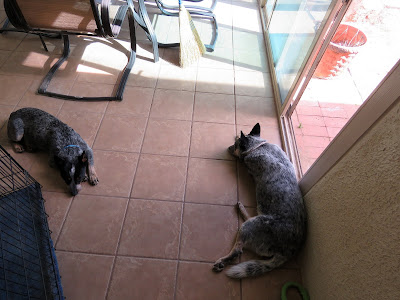 I'm glad you and Frio had a good hike. The first of many--and I'm sure Willow will be joining you soon.

Looks like a great first day on the trails with Frio.

Yep--looks like Willow will be joining Frio out on the trails soon, and it was a very good day.