Back to the Reg

Dr. K, Willow, Frio and I were back to our now regular hiking area this morning, content to get in a shorter trek on another cool morning:  52F when we headed out.

While we were taking a break in First Arroyo a white Standard Poodle stood up on a nearby ridge scoping us out.  He barked at us once, but both Willow and Frio didn't take the bait.  Then we saw the dog's human, the woman we often encounter jogging with the dog.  When she heard her dog bark at us, she called out, "Come, Casper," and Casper immediately ran to her.  I waved to the woman and she waved back.

Just as we were exiting the arroyo another woman with a dog--who we also encounter all too often--came running up LDR.  I held Willow back to let them pass, and, at first, it seemed as if Willow would behave well; but as soon as the woman's dog started snarling at the Heelers both went off, and Dr. K and I had to hold them back.  I envision a time in the not-too-distant future when we'll be able to break both dogs of this unwanted behavior.

Just as we got back to the high flatland near the end of our hike a woman riding a beautiful horse rode along LDR ahead of us.  I was only able to get a photo of the equestrians as they descended toward the major east/west arroyo. 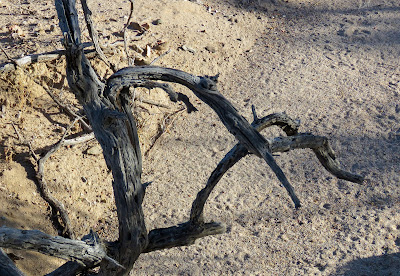 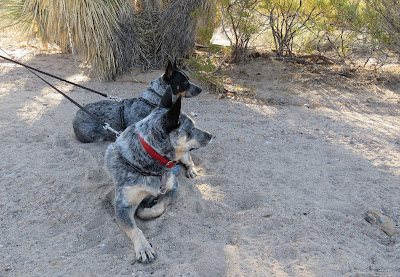 I really like the photo of the blossoms of the creosote bush.