Dr. K, Becca and I started our Sunday morning hike just after 8 a.m. on the Bar Canyon Trail in Soledad Canyon, Organ Mountains-Desert Peaks National Monument.  Only one car was in the parking lot as we headed off to the east.  We took the first right onto the loop trail and trekked south all the way to the military gate where the sign (pictured below) warned us off going any further.  The gate blocks entrance to one of the boundary areas of Fort Bliss Military Reservation, an enormous tract of land that stretches all the way down to El Paso, Texas.

There were two hikers behind us on our outward leg, but we never encountered them; however, on the way back we bumped into quite a few outdoor enthusiasts.  One young couple had a small dog with them, and the man picked the canine up and carried him--perhaps worried about an encounter with Becca who was on lead by that time.  As the couple passed we couldn't help but notice that the dog the man was carrying looked like Becca's Mini-Me.  I said to the couple, "It looks like you have a miniature version of our dog."  They laughed, and the man said, "He's only five months old."  The puppy was squirming to be let loose, but the guy said, "You're all right."

We encountered several other people on the way down to the parking lot, which was nearly full when we reached it; and more cars were pouring in as we hopped inside of Whitey the CR-V for the ride home. 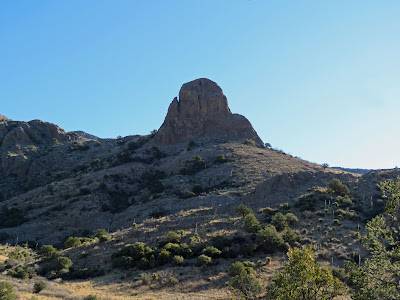 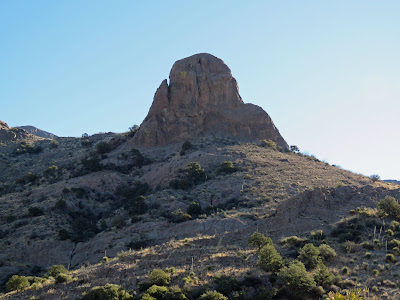 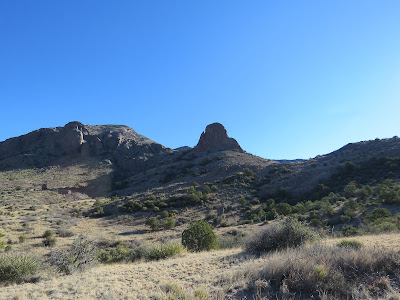 It's always fun to get to see the interesting rock formations on this side of the mountain range.