Dr. K, Becca and I had an interesting Sunday morning hike on the Sierra Vista Trail (south) in Organ Mountains-Desert Peaks National Monument this morning.  The weather was cloudy and cool, though the absence of wind kept it from feeling too cold.  In the parking lot when we got there was a man and his dog, both part of the Mesilla Valley Search and Rescue team, a team we seem to run into every so often.  I asked the gentleman if they were having an exercise there this morning, and he said, yes, they would be doing search and rescue drills beginning at 8:30, but he made a point of reassuring us that we wouldn't interfere with their practice if we headed south on the trail.  Once underway Dr. K and I were surprised by the large numbers of California Poppies and Evening Primroses that were either in bloom or beginning to blossom because it seemed far too early for their appearance.  Dr. K speculated that it might signal the advent of a good wildflower show in the spring.

On our way back to the trailhead we ran headlong into two men and their dog from the search and rescue team, but Becca and the S&R dog--which I believe was a Belgian Malinois--didn't interact.  However, a short while later, as we continued heading back, a young family--father carrying an infant in a backpack, young mother and two dogs--approached.  The dogs were loose, friendly, and one looked very much like Becca's twin.  All hounds interacted without incident while we humans--except for the kid--remarked on the similarity between the near doggelgangers.  Back at the trailhead the parking lot was filled with vehicles, people standing around in small groups, and search-and-rescue dogs, some of which were barking.  We managed to pile inside Whitey the CR-V and get out of there sans further canine encounters.  All in all, despite the crowd, it was a very nice Sunday morning trek. 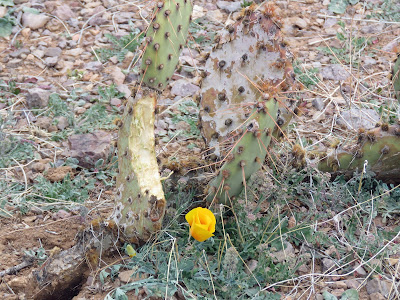 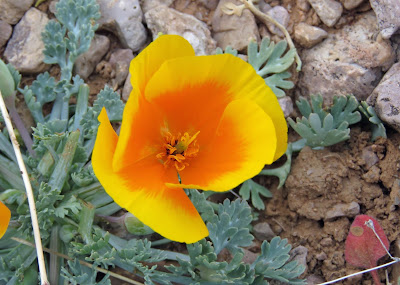 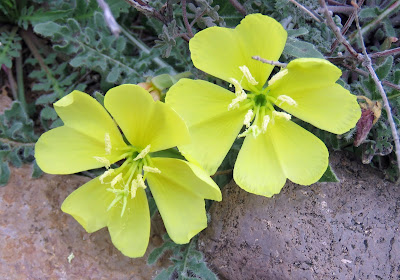 I was very surprised to see those flowers blooming already--I can't wait for more to bloom.