Another Round of Rain

More rain fell in the early evening and throughout the night yesterday, and evidence of further runoff was everywhere in our section of the northern Chihuahuan Desert as the four of us hiked this morning.

Fortunately, even though the forecast called for a chance of precipitation early today we got in a long trek without getting wet:  down LDR-A, up LDR to Second Arroyo, eastward into the arroyo to our resting spot, a quick turnaround because there were too many ants, and back to the waiting CR-V.

On the return trip we encountered the elderly woman who uses two hiking sticks on her peregrinations; she was singing "Life in the Fast Lane" as she approached, and then made a comment to us about how much easier it is to walk on sand compacted by rain.  We agreed.  Nothing aggravates more than trying to make quick progress forward on loose sand--like walking on the beach.

Just as we reached the major east/west arroyo a man jogging ahead of a woman waved to us; we waved back.  Because they were coming down LDR we chose to return via LDR-A, still passing close enough to the man and woman to exchange greetings.

It was cooler out there this morning, but still very humid; and it looks like rain is a possibility for later today. 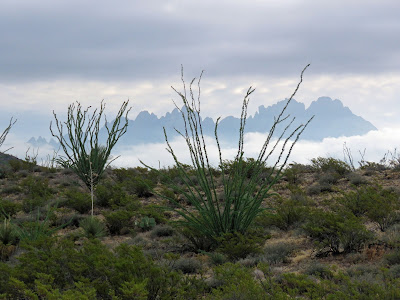 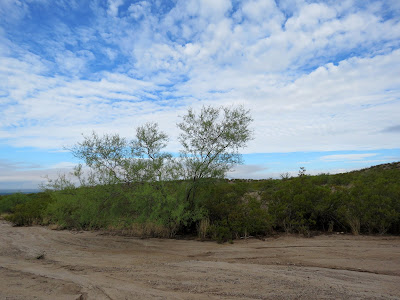 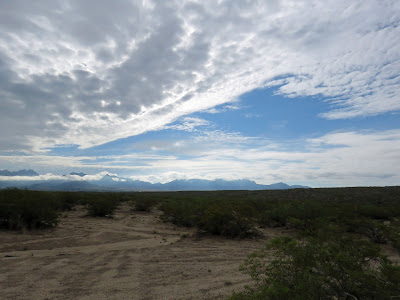 Some spectacular photos of the desert and sky, Packrat.

On the way down LDR-A Willow's behavior was 98% better this morning than yesterday; she still pulled a lot, but nothing equivalent to he...