Another Solo with the Duo

The first third of the hike this morning was annoying because Willow and Frio (but mostly Willow) were on a scent.  They lost it not far beyond the Tellbrook Arroyo, and we were able to trek up to Second Arroyo in relative peace.

We entered the arroyo, spent a bit of time there, and then climbed the hill between Second and First Arroyo.  While we stood on the ridge surveying the territory we saw the man and woman we see out there frequently.  They were headed north on LDR.

We dropped down into First Arroyo, spent a short time there, and then crossed west to LDR to make our way back into the upper flatland.  The final third of the hike became annoying again when the Heelers picked up a scent that led them to pull me up the incline to the waiting CR-V.

A nice shot of this morning's moon. 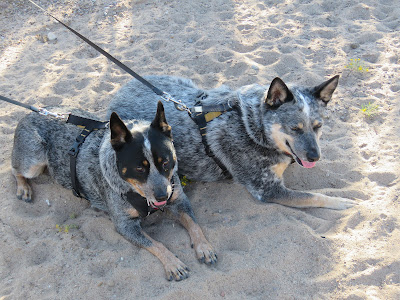