As the blog title suggests:  it was very hazy this morning--probably smoke from New Mexico and Arizona fires--and the bugs were back en force.  It wasn't until the second half of the hike that the wind picked up enough to disperse the insects somewhat.

After a brief stop in First Arroyo, where we rested and hydrated, we headed back, bumping into Pamela and Terry on the way.  We exchanged greetings, both Frio and Willow being well behaved during the process.  Pamela seemed steamed off and upset about finding a rattlesnake on their property yesterday.  Nobody seemed especially gabby so we went our separate ways.

For the past three days I've had to contend with traffic congestion on Tellbrook because road crews are repairing the driving surface.  If they come much further up beyond Noche Bella Loop I may have to find an alternate place to hike until construction is finished. 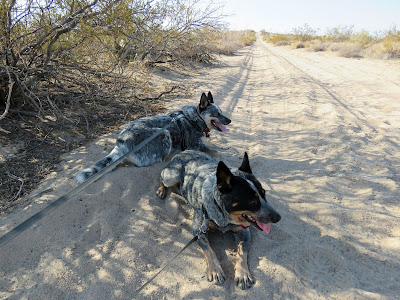 Such cute photos of the Heelers, especially the one where you're almost eye level with Willow.